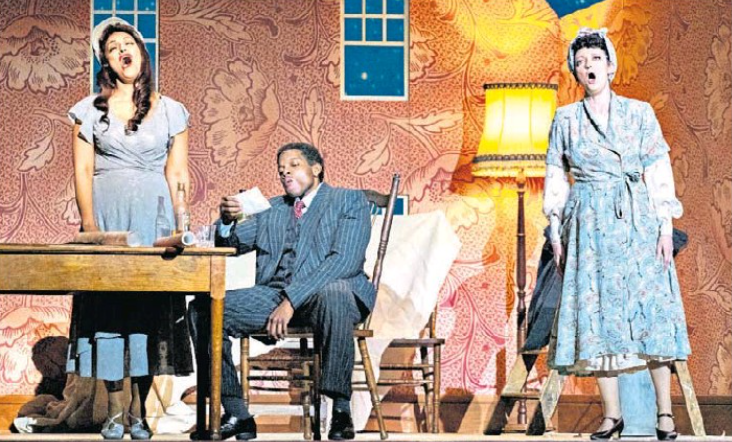 English National Opera is on the brink of a precipice: in the wake of Arts Council England’s politically motivated and entirely unnecessary decision to withdraw its entire funding next April unless it moves out of London, the company is facing extinction in its present form.

The company’s artistic director, Annilese Miskimmon, appeared on stage before the start of this performance to speak of this “devastating” news, which she referred to simply as ACE having decided to stop funding the company.

She expressed gratitude for the petition to save it started by singer Bryn Terfel and the “love and support and anger” shown nationally and internationally over ENO’s plight.

pretty smart. Frank Capra’s famous film of 1946 starring James Stewart has become established as a Christmas regular, and it was a natural for operatic treatment.

The story of George Bailey, the naive but generous romantic of Bedford Falls, driven to contemplate suicide by mounting adversity but rescued by the generosity of the people he has helped, assisted by a nearby angel, is touching

and tear-jerkingly emotional. Jake Heggie is now one of America’s most-performed opera composers: It’s a Wonderful Life was staged by Houston Opera in 2016 and revised for San Francisco in 2018 and is now a Christmas fixture in the United States.

Heggie had the advantage of a librettist in Gene Scheer who was not afraid to tamper with the original, and to shape it as a feel-good opera, adding more angels, and removing several of Capra’s darker scenes while keeping his sharpness and wit.

The ENO production by Aletta Collins starts with a spectacular scene in the heavens, but is then constricted by Giles Cadle’s dull grey-walled sets which place some of the vital scenes too far upstage to make their impact.

However, Heggie and Scheer’s cleverest stroke, to turn the elderly male angel Clarence from the film into the glamorous angel Clara, works a treat, especially as Danielle de Niese’s extrovert presence and rhapsodic voice is ideal – she is on stage throughout, controlling the stage movement by taking her hat off, and swings aloft vertiginously in the finale.

I was less sure about Frederick Ballentine’s George Bailey, attractive but too light-voiced, lacking the put-upon drama of James Stewart, though making an ideal love-match with his clear-voiced wife Mary (Jennifer France), whose extended aria is one of the best things in the score.

But even though it’s effective and enjoyable, I can’t quite see It’s a

Wonderful Life establishing a regular foothold in the repertory here.

Read More
Previous LinkDanielle de Niese: I worked in the gardens at Glyndebourne during CovidNext LinkIt’s a Wonderful Life review – operatic adaptation is on the side of the angels