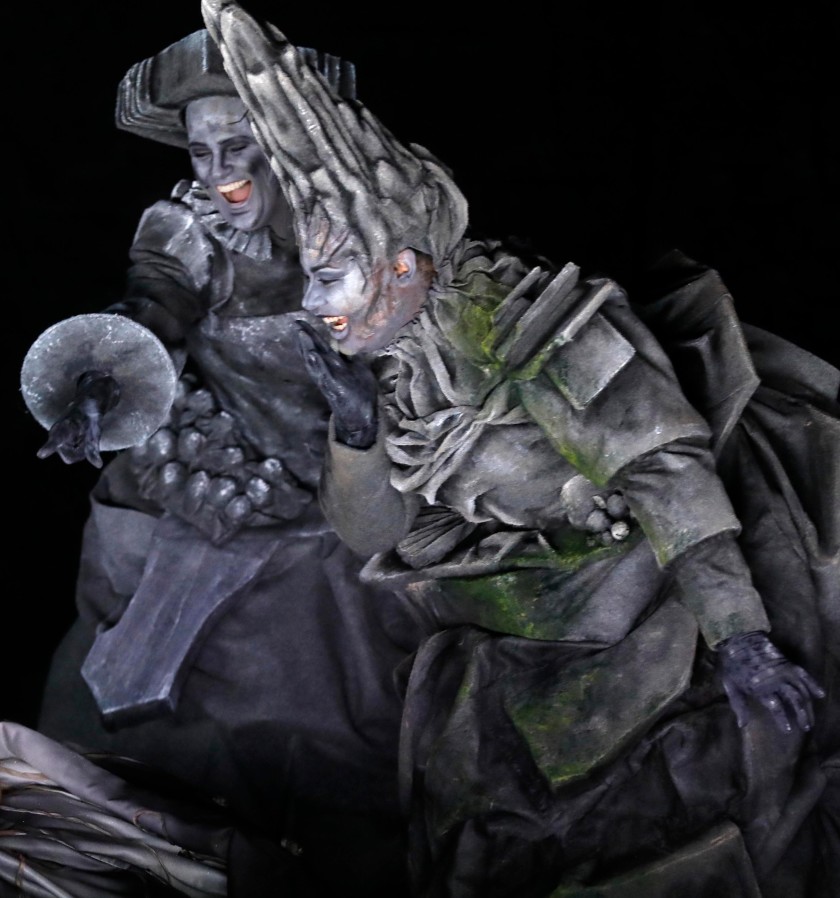 In between, we have seen operas, plays, poems, ballets, films, novels and paintings galore on the Orpheus and Eurydice legend. Some myths won’t die.

This new “Eurydice” is meant as a major moment for L.A. Opera. The company has made a long-standing investment in Aucoin. As composer, conductor, pianist and artistic director of the American Modern Opera Company, or AMOC, he is in the forefront of revitalizing what American music theater can mean with several of our most revolutionary young talents, such as singers Julia Bullock and Davóne Tines and cellist Jay Campbell.

Aucoin was L.A. Opera’s artist in residence from 2016 through 2019. He conducted “Akhnaten” and “Rigoletto.” He presented some intriguing post-opera recitals with singers. He led a semi-staged performance of his 2015 opera, “The Crossing,” about Walt Whitman. He also, in the midst of all that, got that ultimate recognition of promise, becoming a MacArthur “genius” fellow.

His presence, however, wasn’t all that it might have been. He was away most of his last season writing “Eurydice,” a co-commission and co-production with the Metropolitan Opera and his first big main-stage opera.

Has he now, at age 29, arrived? Next question, please.

“Eurydice,” based on the play by Sarah Ruhl, is ambitious, confident, often impressive, mostly engaging, instrumentally colorful and splendidly singable. At its best, it is gratifying grand opera. It is, though, both a step forward and a step back for a young composer trying things out. What he is up against here is the big business of big opera, especially that of the Met, which has a poorer recent record than L.A. Opera of smartly shepherding new work.

Originally, Aucoin was to have fulfilled two commissions, an opera for the Met and another as the culmination of his L.A. Opera residency. That proved unfeasible, and so one opera, its subject already having been suggested by the Met, became a two-company project, said to be a 50-50 collaboration. Even so, the needs of a New York behemoth, and a production team with a strong Broadway component, feels a step back from Aucoin’s more progressive-running AMOC.

This is the Orpheus legend from Eurydice’s point of view. The beautiful nymph is the love and inspiration for the demigod Orpheus, a singer of such persuasion that no creature or even inanimate object could resist, fiction’s first superstar. After Eurydice dies, Orpheus woos the god of the underworld to release her on the condition that he not turn back to look at her as she follows him out.

He fails. He has a miserable life afterward and ultimately is decapitated. Eurydice, a mere nymph, is out of the picture. But what is it like to die twice?

Ruhl is hardly the first to give voice to Eurydice, who riotously mocks Orpheus’ pomposity in Offenbach’s “Orpheus in the Underworld.” Ruhl was inspired by Rilke’s Orpheus sonnets, as was Ernst Krenek’s exceptional 1926 “Orpheus und Eurydike,” the opera’s Eurydice here modeled after Mahler’s wife, Alma.

Ruhl’s Eurydice is less liberated. This heroine, a modern woman, is not content to be Orpheus’ muse, but she is also not yet able to break from her recently deceased father, now in the underworld. It turns out, he is able to write her letters. Hades, a louche character, tricks her on her wedding night into falling downstairs, whisking her away to his realm, where she meets her father.

The play revolves around the issues of memory and loss, what can we retain and what not, the porous border between life and death. Aucoin has said he was drawn to the elliptical nature of Ruhl’s poetic text, which is full of musical allusion, and the implied silences just waiting to be filled by music (however much silence can be its own music). Ruhl is credited as librettist, but the composer worked with her to cull the text by about 40%, effectively removing unnecessarily explanatory passages.

For some reason, they didn’t get around to cutting the pedestrian opening scene, the opera thus beginning with the playful young couple at the beach and an immature Orpheus’ awkward marriage proposal. They toss a beach ball. Aucoin offers sunny orchestral glitter. Eurydice tries to get her lover to be a bit more communicative. They have a good time. You could be at Santa Monica any day of the week.

Where the opera really begins is the second scene, in the underworld (you get there by elevator). Eurydice’s father is writing her a letter, giving us a glimpse at a peculiar setting, familiar and not. Here Aucoin, as though fishing in the same Rhine as Wagner did, creates a sense of wonderment and mystification. Rod Gilfry, who was Aucoin’s Whitman, is the voice from the beyond as the voice of the here and now, an exceptional accomplishment. Ruhl’s Bardo is our world seen through Alice’s looking glass.

After that gratuitous opening scene, director Mary Zimmerman’s production is refined, with elegant sets by Daniel Ostling and fanciful costumes by Ana Kuzmanic. The cast is superb, headed by Danielle de Niese, who is a radiant Eurydice. Joshua Hopkins isn’t asked until the last of the three acts to reveal much substance, but Aucoin’s novel approach to treating Orpheus as a regular guy with a supernatural gift of song is to have the baritone sometimes doubled by a countertenor (John Holiday), adding a spectral aura to Orpheus’ sound. Hades (Barry Banks) is a high tenor who whines, punctuated by the orchestra, always oddly.

Aucoin’s orchestra roils, and he here conducts with a new sense of graceful authority. Instruments are used with imagination. The percussion section is large, active and striking when it needs to be. Sonic effects keep up the interest and variety. There’s a little something for everyone in the score, from intimations of Vivaldi, to Puccini, to Philip Glass and particularly John Adams, to Gregorian chant, to a glimpse of rock and the sound of radio static.

Although he can sound derivative, Aucoin’s voice and language is more patina than a pastiche. He creates mystery without unneedful mystifying. In “The Crossing,” with its conflicted figure of Whitman, Aucoin found occasional temptation toward the maudlin. Ruhl’s Eurydice, on the other hand, demands it.

The opera ticks off many expected boxes: a lively party scene; a trio of stones, animated rocks that are the comic guardians of the underworld; a villain who is sleazy and scary. The twist in the father and daughter scenes is their effort to remember their relationship in an underworld where you are supposed to forget. In the end, the twice-dead Eurydice writes a letter to Orpheus meant for his next wife. Too late, she, who was reluctant to return to life and entices him to turn around, has understood her husband. You can, she learns the hard way, never look back.

In the opera world, though, we do nothing but look back. “Eurydice,” as it now stands, has enough going for it to have legs. But with revision (that opening scene), it could have more intrigue. Even so, it is an accomplishment for a company whose previous premiere, Ellen Reid’s “prism,” won last year’s Pulitzer Prize for music, a breakthrough for another young composer.

While you’re at the Chandler, check out Reid’s new installation based on “prism,” part of the company’s “Eurydice Found” festival with events around town. Really, that’s a Eurydice sought festival. Ruhl didn’t find her. Aucoin has come closer, but as his new opera demonstrates, it’s all about the looking.

When: Five additional performances through Feb. 23