How many “geniuses” does it take to write an opera? The creative team who brought the world premiere of LA Opera’s newest opera (a co-commission with the Met), Eurydice, to life Saturday night includes three MacArthur “genius” grant recipients: composer, Matthew Aucoin; librettist, Sarah Ruhl; and director, Mary Zimmerman. Given the brilliance of the piece’s music, its moving and unique take on the Orpheus and Eurydice myth, and its deft execution, three “geniuses” make for one captivating opera. 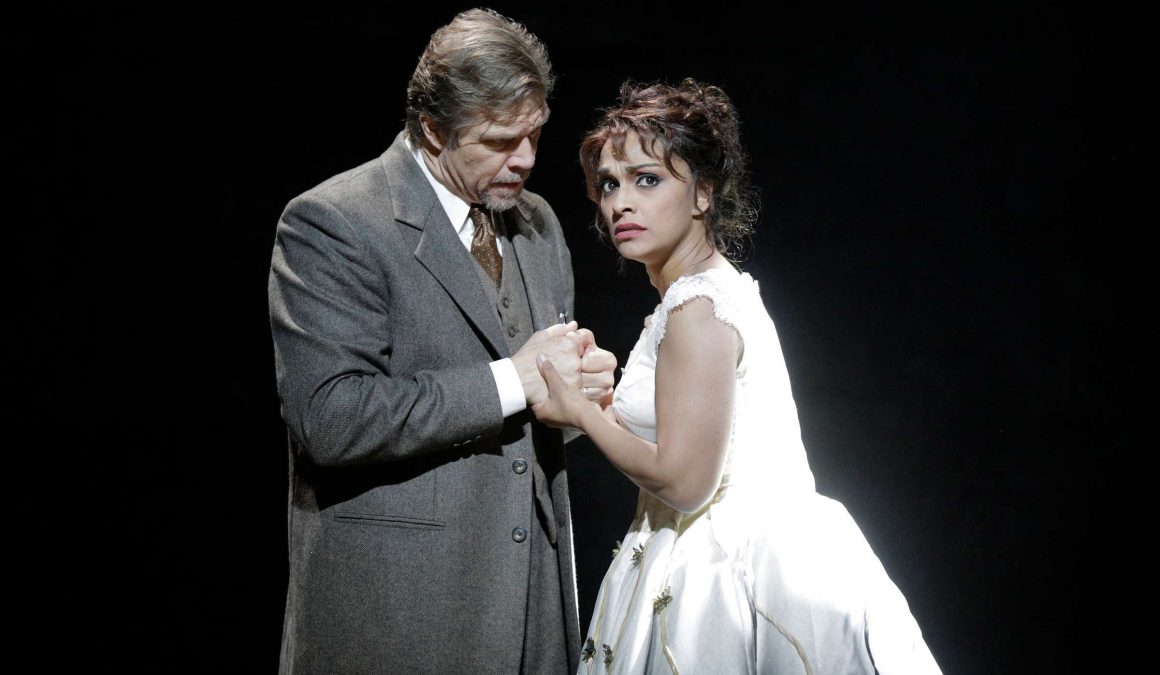 Ruhl’s libretto, based on her acclaimed play by the same title, tells the tragedy poetically from the heroine’s standpoint. It is not modern day, but it is close enough. It is a story that, while familiar, is wholly new due in large part to the addition of the character of Eurydice’s father. Rather than fall into a nest of vipers, Eurydice is tricked into following an Interesting Man on her wedding day who tempts her with a letter from her deceased father. Eurydice’s desperation for that letter leads to her death. The reunion of Eurydice and her father is sadly hindered by Eurydice’s memory loss upon arriving in the Underworld. Her father (movingly performed by Rod Gilfry) tenderly sees to Eurydice’s comfort by building her a room, teaching her to speak and read again, until she remembers who her father is.

The 29 year-old Aucoin’s score is a dense and energetic whirlwind, assured of its purpose from the opening bars. With around two hours and fifteen minutes of music, it is remarkable how focused the piece is, moving tautly through the narrative while lingering on emotional exposition sufficiently. Aucoin expertly utilizes the orchestra as an unnamed character in the opera. While his vocal writing is often exclamatory, the driving energy of Aucoin’s orchestration supports the words in a way that the singing doesn’t. Built around the words, the vocal writing is less melodic than dramatic. Indeed, there were moments where one longed for a simple cadence to drive a tender point home, but there was no such comfort to be found. 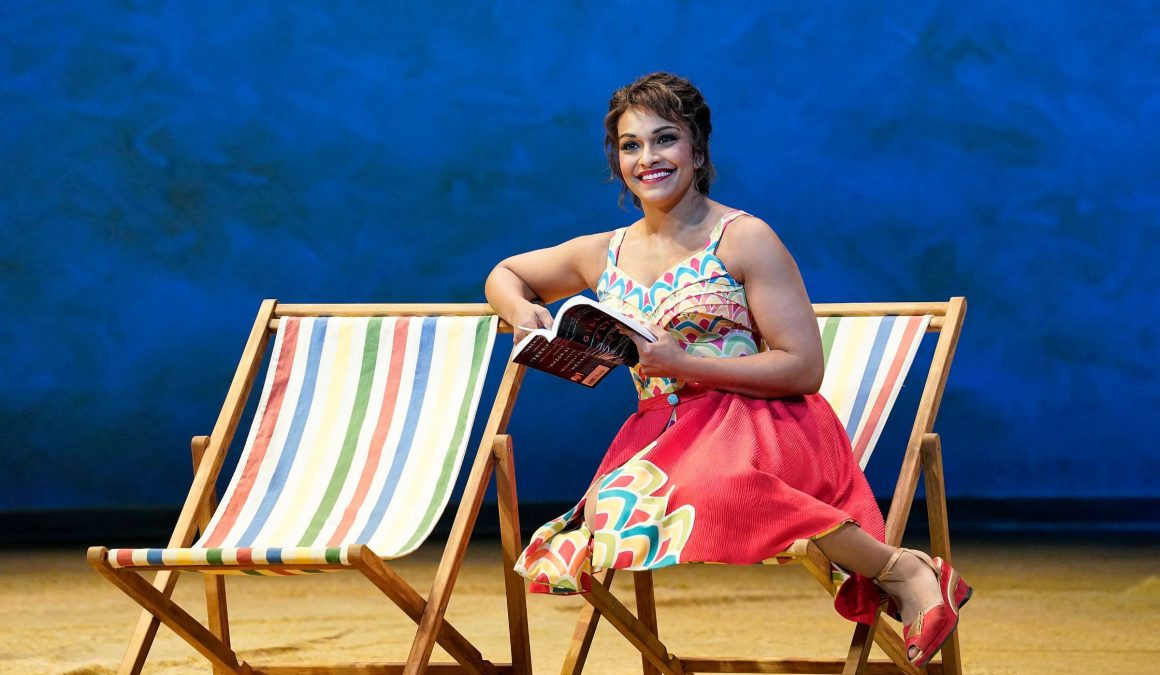 Yet the results were very persuasive. With a dizzying array of styles, Aucoin’s music is a smorgasbord of pastiche. Some allusions were more obvious than others with clear odes to Wagner’s Ring, Philip Glass’ choral writing, John Adams’ percussive orchestrations and Korngold’s over-the-top harmonic revelations. But rather than feeling derivative, the pacing and variety of sound speaks to the universality of the subject matter. The LA Opera Orchestra played the score with verve and precision.

As the title character, Danielle de Niese was a revelation: strong, moving and vulnerable. Onstage for nearly the entire opera, de Niese was an enveloping presence. Her second act aria on “to love an artist” was captivating and touching, particularly as related to the comforting Gilfry.

Her husband, Orpheus, is a shadow of a hero. Sung by baritone Joshua Hopkins with stentorian presence and a beautifully coherent sound, Orpheus is distant and one-dimensional, unable to express himself despite his unparalleled gift of music. This duality was partly achieved by Orpheus’s Double, sung with outstanding musicality by countertenor John Holiday, who would sing particular phrases of Orpheus’s in harmony with the baritone Hopkins. 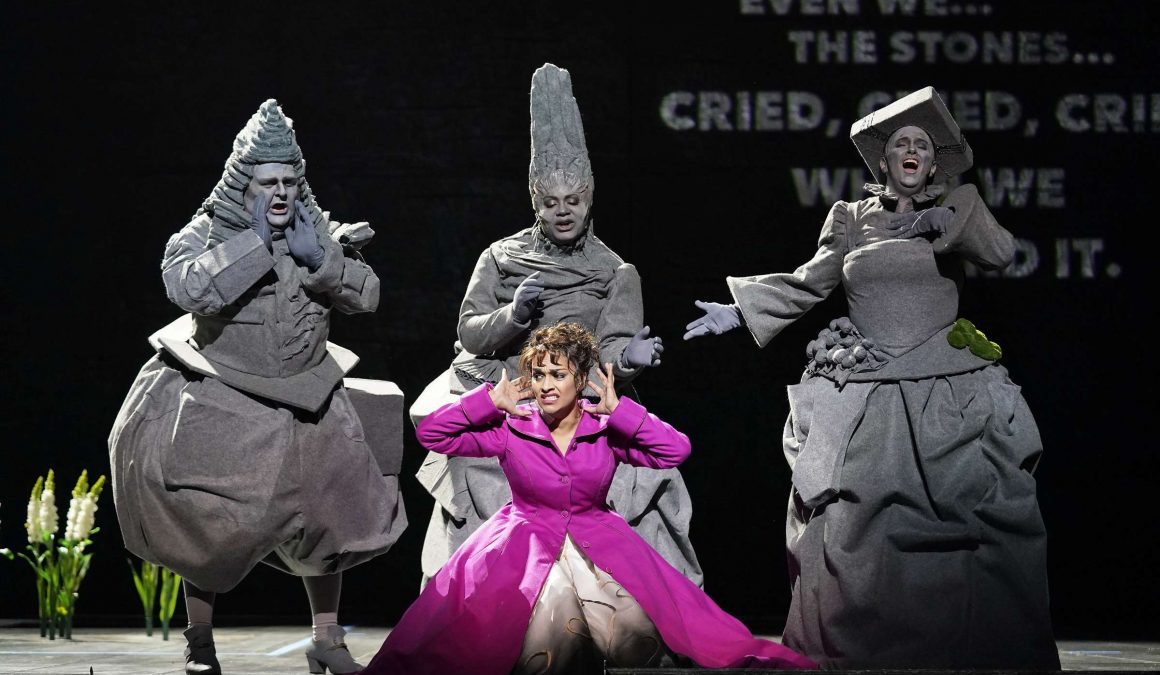 Barry Banks was an amusingly menacing Hades. His high tenor register was powerful and always vocally secure. One couldn’t hate Banks’ Hades too much. As the three Stones, Stacey Tappan, Raehann Bryce-Davis and Kevin Ray were welcome comic relief sung with musical prowess.

The Stones looked great, as did all the characters in the Underworld and above in Ana Kuzmanić’s costumes. Mary Zimmerman’s stage direction was exceptionally organic and moved with purpose in supporting Aucoin’s music and Ruhl’s drama. Dan Ostling’s scenery worked well and although sparse, made for a functional and engaging stage. One does wonder though how this will play on the larger stage of the Met. The outstanding LA Opera chorus was entirely offstage, so it is an intimate opera despite its epic drama – that shouldn’t give New Yorker’s pause to buy their tickets, however.

It would be misguided to say that this Eurydice is a feminist point of view. Heroes and heroines are more complicated than they appear. Orpheus, despite his dedication to his wife and his heroic journey, has insecurities that lead to his and Eurydice’s inevitable downfall. Eurydice’s heroism is in her struggle with loss, her coping with grief, her choosing to grow up. Eurydice is, perhaps, a tale all too familiar to modern audiences and, despite its mythical foundation, more relevant today than ever.

Read More
Previous Link“Eurydice” is a gratifying grand opera with Danielle de Niese in the title role. NOW through February 23rd.Next LinkReview: At L.A. Opera, Matthew Aucoin’s ‘Eurydice’ almost has it all