By David Mellor for Event

If you want to turn a sow’s ear into a silk purse, send for conductor John Wilson and soprano Danielle de Niese. Because that’s what they’ve just done with this Cendrillon.

First put out on Glyndebourne’s winter tour last year, Massenet’s little-known take on the well-loved tale of Cinderella and her Prince Charming was dominated by the perverse egomania of director Fiona Shaw.

She turned Prince Charming and Cinders into a pair of lesbians, and a kid (the young Cinders, I guess) danced around distractingly, ruining some of Massenet’s most beautiful orchestral music.

And the set was dominated by butterflies, including a weird, androgynous figure capering about. You couldn’t make it up, but she did. Well that sort of thing still goes on here but – hey presto! – you don’t really notice because the music-making, which an old-fashioned guy like me continues to think is what opera is all about, is so good.

Wilson, in five weeks of meticulous preparation, has made this Cendrillon sound wonderfully well, with the London Philharmonic on top form, and all the voices blending in a way that wasn’t achieved earlier.

Wilson particularly brings out the Wagnerian echoes in stuff like the memorable Love Duet in Act II and Cendrillon’s extended monologue at the beginning of Act III. 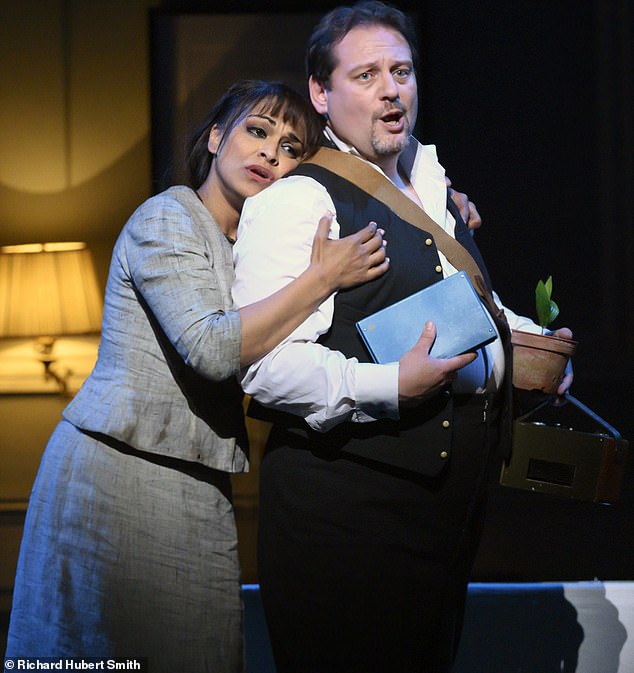 Cinders herself is charismatically portrayed by Danielle de Niese, who revels in the part and Lionel Lhote is also far more effective than his tour predecessor as Pandolfe

Cinders herself is charismatically portrayed by de Niese, who revels in the part. The years fall away and she is transformed into a downtrodden young woman elated by being able to turn the tables on the Ugly Sisters.

They are winningly portrayed by the irresistible comic team of Eduarda Melo and Julie Pasturaud, plus, of course, the wicked stepmother, a role brilliantly reprised from the tour by Agnes Zwierko.

It also helps that Kate Lindsey, as Shaw’s ‘Princess Charmless’, is so good. Her duet with de Niese is a terrific listen. Lionel Lhote is also far more effective than his tour predecessor as Cendrillon’s well-intentioned but feeble father, Pandolfe.

To complete a winning team, the show is almost stolen by the superb coloratura technique of Nina Minasyan as the Fairy Godmother.

The only thing Cendrillon lacks is a few of Massenet’s killer tunes, such as you find in Werther, or Manon, or in that delicious orchestral Meditation from Thais.

It’s Wilson’s achievement to present this score so magically that you hardly notice there is nothing totally melodically memorable in any of it.