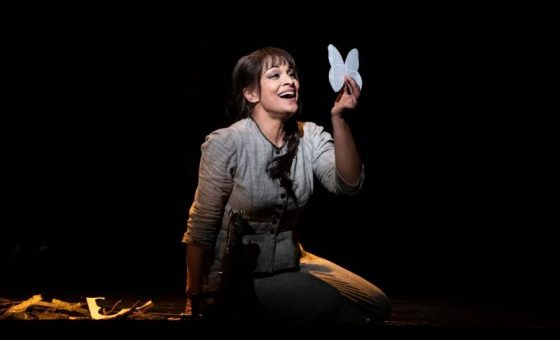 French Composer Jules Massenet premiered his opera “Cendrillon” in 1899 at the Théâtre National de l’Opéra-Comique in Paris. Best known for its radical story-telling of the fairytale Cinderella, this opera is centered around dreams-versus-reality and highlights Massenet’s surrealistic tendencies before the surrealism movement even began.

Glyndebourne is a legendary hub that produces “no ordinary opera,” therefore, when they announced the production’s director, Fiona Shaw, for Glyndebourne’s 2018 tour opening, it made sense. Shaw is known for intelligently navigating the psychological undercurrents within her projects and could uncover more about Massenet’s Cinderella.

After a successful run of Shaw’s tour production, Glyndebourne then added a twist in the 2019 festival by announcing director Fiona Dunn as the one to carry forward the torch, along with set designer Jon Bausor’s modern conceptualization.

With a Damien Hirst inspired blue butterfly on stage, the theme of the night was clear: follow love and freedom. And as one watched the story unfold, three Cinderella’s came to life: a comforting child that cares for her older self, an interpretive mime-like version that shadows the Prince in difficult times, and the real-time Cinderella, named Lucette, as sung by Danielle de Niese.

All three versions imitated different psychological realizations, based on Cinderella’s psyche. One might have connected with one of the versions more strongly, opening the path wide while navigating Massenet’s mysterious synopsis.

De Niese personified Cinderella, Lucette, as an angelic bystander to her chaotic familial environment. De Niese’s eyes were a window into her soul as she sang with unwavering conviction. Exposing the heart of Cinderella, De Niese told a convincing story.

And, as to be expected, Cinderella’s family was an array of unleashed lawless behavior. Lionel Lhote, as Pandolfe, sang the role of an oppressed passive-aggressive father exceptionally well. He scurried about the stage while Madame de la Haltière, the step-mother, sung by Agnes Zwierko, unraveled in a comical whirlwind of drama. The step-sisters, interpreted by Eduarda Melo and Julie Pasturaud, also provided an over-the-top entertaining atmosphere. Both Melo and Pasturaud played modern day, selfie-taking, borderline distasteful girls, that mirrored their characters’ ugliness from the inside. One moment, in particular, showed Pasturaud mindlessly eating a bag of snacks while eagerly waiting for more drama to unfold. The details were undoubtedly on point, and the audience savored this wild display.

Kate Lindsey, as the Prince, told the story of someone also wanting to escape their environment. The Prince is seen exploited and ridiculed by the King’s staff, and in one scene, the production takes a very dark turn as it ushers the Prince to a medical table behind glass windows, surrounded by close examiners.

Lindsey laid quiet while one of the staff members extracted the Prince’s heart and sutured it onto his sleeve, symbolizing the tormented life he leads under constant critical watch. Lindsey also personified sexual fluidity in her role by alternating roles as the Prince and Lucette’s female servant. This ambiguity felt contrived. However, Shaw never intended this production to be a pantomime. So what saved this ambiguity from going off the rails was Lindsey’s voice. She carried her role forward through these uncertain moments and showcased her unmatched vocal ability.

When The Fairy Godmother, played by Nina Minasyan, arrives to prepare Lucette for the Prince’s ball, the real magic of Massenet’s composition takes over. Minasyan’s concisely clear coloratura webbed an aura of glitter and fancy that brought Cinderella as a dream and a fairytale to life. Wearing a costume of iridescent materials, Minasyan resembled a butterfly of ethereal existence – a vision of what Cinderella strives to be.

Once at the ball, the Prince is bombarded with options and as the story goes, finally meets Cinderella and falls in love. However, Shaw interpreted this part in a more experimental way by shedding light on the transfiguration process when ash (carbon) transforms into a diamond. Thus, Jon Bausor’s set design was center stage with a series of rotating glass prisms that could house portions of the scenery and Cinderella herself!

At one point, we saw Cinderella dancing like a butterfly within the prisms, resembling Alexander McQueen’s “Savage Beauty” holographic display of Kate Moss, in his most famous white dress. It was a beautiful exploration of love, freedom and personal identity on all levels.

Overall this production left audience members to digest an array of questions, including the most simple of all: what if, in the end, a fairytale is simply a fairytale, and love is simply love?