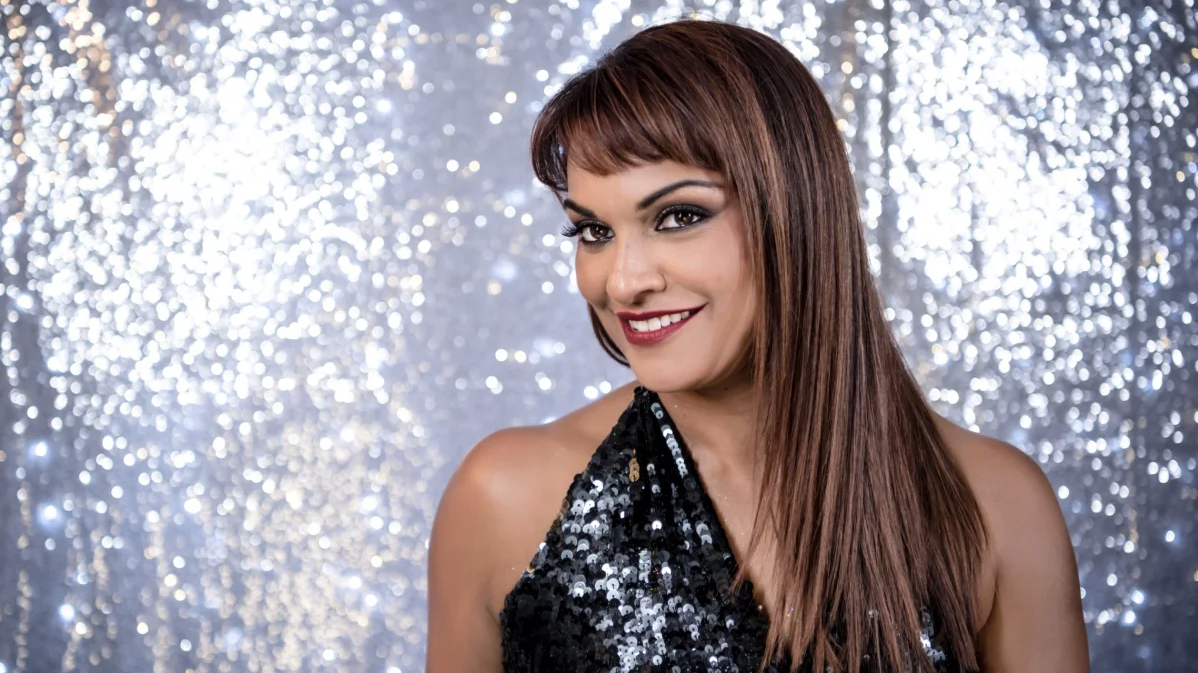 ‘We’re just going to get on with it and make this show amazing,’ says Danielle De Niese who sings Clara, the angel in the ENO’s version of It’s A Wonderful Life (Photo: Genevieve Girling)

Danielle de Niese whirls out of an English National Opera rehearsal barely two hours after Arts Council England has slashed the company’s funding. I’ve caught the star soprano in a moment that would have been frantic even without what many have seen as a financial attack from the Government on the profession. Fresh from singing the role of Musetta in Puccini’s La Bohème at the Royal Opera House, she is in the full flood of preparations at ENO for the UK premiere of American composer Jake Heggie’s 2016 opera It’s a Wonderful Life.

It is a work that maybe only the ENO, with its magnificent stage capabilities, English-language mission and family-friendly policies (under-21s go free), could or would tackle in the UK.

With a starry cast headed by de Niese and a directorial debut for Aletta Collins, it stands to demonstrate exactly what will be lost if ENO is destroyed.

Art Council England’s plan to reduce the company’s grant to zero unless it moves out of London has sparked outrage: the company was founded nearly 92 years ago, yet can be killed off with one ill-placed stroke of a pen.

Nobody has yet had a chance to process the devastating news. “We’re all shell-shocked,” says de Niese, who is one of the country’s biggest and most exciting classical stars, thanks to her diamond-strong soprano voice, plus her all-round capability as a “stage animal” skilled in movement and acting alongside the sonic fireworks.

“But we don’t have time to be shell-shocked. We have to rehearse! We’re just going to get on with it and make this show amazing.” If you’ve ever wondered about the truth of the saying “the show must go on” — well, here it is, alive and kicking.

ENO’s big Christmas show is based on the 1946 film by Frank Capra, itself inspired by the story The Greatest Gift by Philip Van Doren Stern. An “angel, second class” — the sweet-natured, bumbly Clarence (Henry Travers) — must perform a good deed to earn his wings.

He is tasked with guarding George Bailey (James Stewart), who on Christmas Eve is contemplating suicide. Clarence shows him what life in his community would have looked like without his existence; George realises how much good he has done and is pulled back from the brink.

The film may have a reputation as a soppy Christmas fantasy, but the story is emotionally raw and heart-rending. In its transformation by Heggie and his librettist, Gene Scheer, the angel is not Clarence, but Clara — and De Niese sings her. “I think that Clara had been someone who died young,” she says, “and she has waited for 200 years for a chance to earn her wings. The role has a wonderful character arc: she knows what young love is, but doesn’t yet know the depths to which human connection can transform you.” 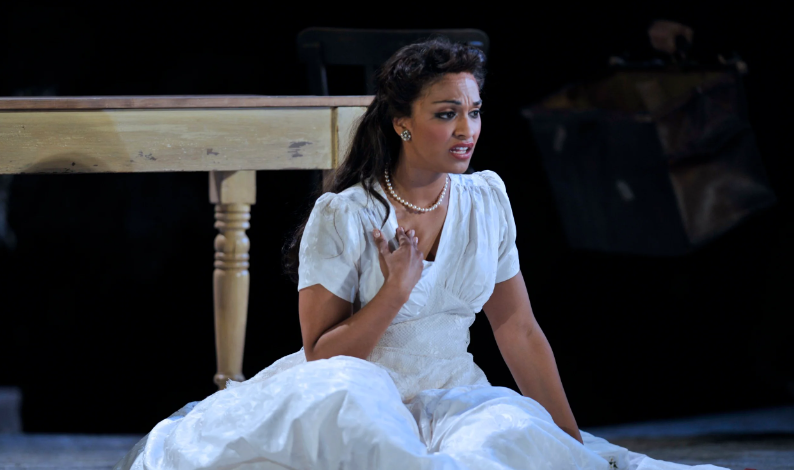 Heggie, a prolific composer with some 15 operas to his name, is less well-known in the UK than in the US, but De Niese believes the show will travel well. “The piece taps into moments of emotional truth.”

Now 43, De Niese earned her own wings younger than most opera singers. She was born in Melbourne, Australia, to a Sri Lankan Burgher family and started voice lessons aged eight. Two years later the family moved to Los Angeles, where she studied at the Colburn School, a specialist college of music and dance.

She learned classical singing, jazz and tap-dancing, and gave her first recital aged only 12. It was in the UK, though, that she made her breakthrough to superstardom. In 2005 Glyndebourne engaged her to sing the role of Cleopatra in a smash-hit production of Handel’s Giulio Cesare. A star was born — and the new star also got to know Gus Christie, whose grandfather, John Christie, founded the opera festival at the family estate in 1934.

Gus took over in 2000 from his father as Glyndebourne’s executive chairman. He and de Niese married in 2009 and now have two children: Bacchus, seven, and Sheherazade, two. De Niese is also stepmother to Gus’s four sons from his first marriage.

The physiological changes in the body from two pregnancies may have made a difference to De Niese’s voice, though she says she is not sure how much. “My voice is definitely going through some growth,” she says. “I felt it quite strongly when I had Bacchus. I know other singers who have had children whose voices have not become richer, and many of them go back to the roles they sang before. In my case, though, I definitely felt something had settled. It felt broader and wider.”

Her rise to stardom, she says, hasn’t been as headlong as it seems. “People look at the fact that I started very young as if it’s been a mad dash, but actually it’s been a nice, slow march. I’ve been lucky enough to have some great career milestones on the way, but I’m on a path and its destination is still unknown.”

For instance, she’s considering roles that at one point she would have thought impossible. “I just did an event with [the conductor] Tony [Sir Antonio] Pappano where I sang some of Carmen and he said to me, ‘You have got to do Carmen!’”

French composer Georges Bizet’s archetypal femme fatale would have seemed made for her, were the role not usually sung by a mezzo-soprano. “For years, people would ask me about Carmen and I would say, ‘But I’m a soprano…’. Still, when I started trying to sing the ‘Habanera’ [Carmen’s most famous aria] I was like a kid bitten by the Carmen bug. Now I really want to do that role!”

Another French composer has loomed large in her life recently: Francis Poulenc. Earlier this year she starred in a BBC TV film of his one-woman opera La voix humaine, a setting of Jean Cocteau’s monodrama that depicts the agonising end of a relationship over the telephone. Next summer at Glyndebourne, she makes her role debut as the lead character, Blanche, in his Dialogues des Carmélites, based on a real incident in the French Revolution when a convent of nuns were condemned to death by guillotine. 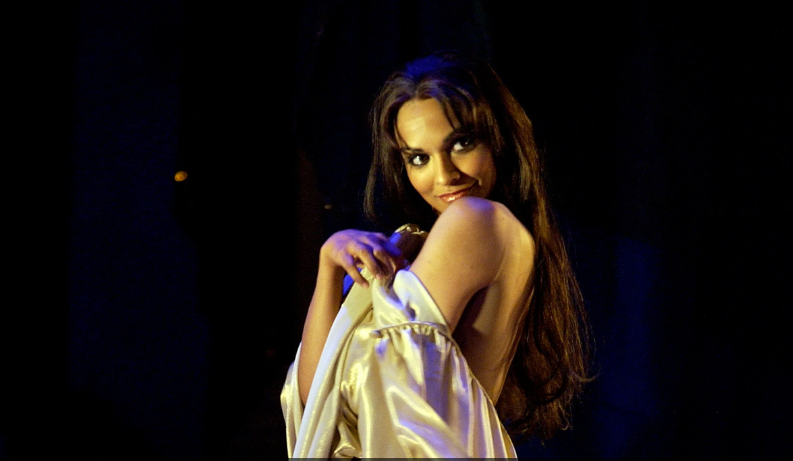 Danielle de Niese as Cleopatra in the production Giulio Cesare at Glyndebourne. (Photo by robbie jack/Corbis via Getty Images)

“Compared to Debussy, Poulenc’s a little bit off the beaten track, but I love him,” De Niese says. “There’s something very sensual about his music, but also an incredible spirituality. I remember singing his “Gloria’ when I was about 19 and wondering why there was a sense of eroticism while singing this religious music. Poulenc puts these two feelings side by side and you’re on the knife edge, right in the middle.”

De Niese lives on quite a knife-edge of her own: managing an international career and a family with its own operatic limelight, she has become a ferocious multitasker. “I’m a fanatic about making lists,” she says, “and I’m quite good at compartmentalizing things. If I have a strategy, it’s to be absolutely happy and grateful in the moment. I’m never with my family and thinking I should be doing something else. I’d rather work at an insane chipmunk level so that I can then stop time when I’m with my family.”

With that, she whirls back to the rehearsal. The show must indeed go on. Perhaps the much-loved Christmas story of George Bailey and his guardian angel can show how much good ENO has done for its community and persuade those in power to pull the company back from the brink of destruction.

It’s A Wonderful Life is at London Coliseum 25 November to 10 December. eno.org