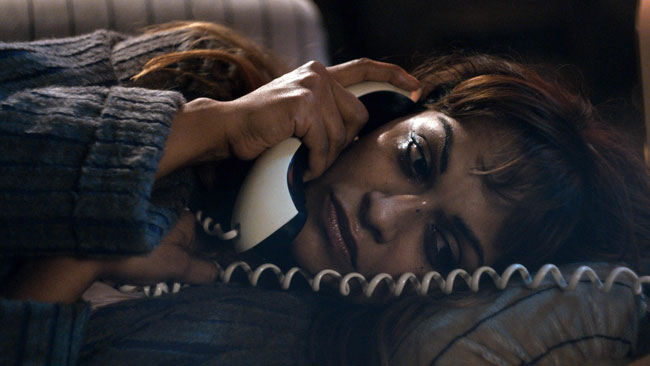 Actor, singer and television personality Danielle de Niese will star as ‘Elle’ in a new film of La Voix Humaine which will screen on BBC Two.

La Voix Humaine, Jean Cocteau’s one-woman drama set to music by Francis Poulenc, is set to premiere on UK television channel BBC Two this spring. Actor, singer and television personality Danielle de Niese will star as Elle in the film, which was shot on location in London and Paris.

With an orchestral score recorded at the Royal Opera House, conducted by Antonio Pappano, the film breaks new ground, with de Niese singing her entire role live on location for her film debut. This technique allowed de Niese – a performer already known for her high calibre dramatic performances – the freedom to approach the work in a way that no live stage performance could ever allow, resulting in an innovative cross genre work of art.

Directed by James Kent (Aftermath, Testament of Youth), with cinematography from Laurie Rose (High Rise, Rebecca) and designed by Peter Francis (The Father, The Children Act), La Voix Humaine has been described as “visceral, heart-breaking, and with extra ordinary intimacy and emotion”. De Niese has been particularly praised for taking audiences “deep into her personal grief”, a performance “supported by some of Poulenc’s most beautiful and emotionally telling music.”

Danielle de Niese said, “I am thrilled to bring Elle to life for the cinema screen and to be collaborating with such a wonderful team of world class award-winning creatives. The piece, which is focused on a single psychological trajectory, feels like it was born for the film lens, not least because the entire work centres solely around the heroine.

“One of the most frightening lines in the film is: ‘If you didn’t love me and if you were clever, the telephone would become a terrifying weapon, a weapon that leaves no trace…that makes no noise.’ This has never been more relevant than today where technology can be both a blessing and a curse – it can connect us but also isolate us. If you have ever felt isolated, misunderstood, led on, heart-broken, hopeful, desperate, desolate, nostalgic… I hope this unique film will resonate.”

De Niese’s performance, captured in the intimate and claustrophobic setting of a single apartment, is the entire focus of the film. A silent observer of her desperate conversation, we witness her decline; a journey from hope and nostalgic memory of her love, to despair and finality of love’s end, over the course of one late afternoon via a single, suspenseful, often interrupted, telephone call with her departing lover.

Written originally in 1928, Cocteau was examining change that the technology of the telephone was to bring to humans and how they conducted their relationships. Regarded as a career defining challenge, it has attracted many actresses and singers since it was premiered as a play in Paris in 1930, and then reimagined by his friend Francis Poulenc as an opera in 1959.

Director James Kent said, “I want the audience to experience this opera in a unique way. La Voix Humaine’s searing emotion when viewed through the cinema lens is astonishingly powerful. Every moment of Elle’s thought process is inescapable. We become witnesses to her tempestuous evening as it heads towards its heart-breaking climax.

“The vulnerability of Danni’s performance was an extraordinary revelation to me and a testament to the intense preparation she undertook for this most demanding of roles. I am thrilled that such a large audience will feel the power of opera when devised for film – the harmonious marriage of concentrated emotion with the everlasting power of the movie close up.”