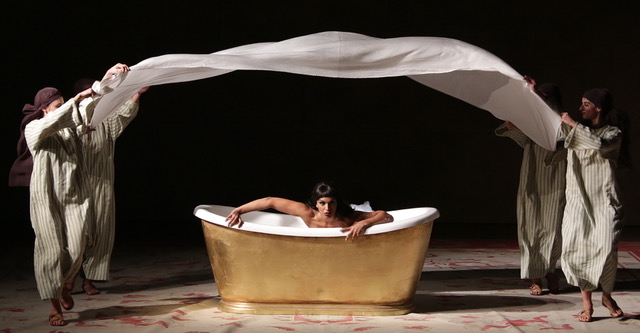 There is a photograph of a triumphant Beverly Sills from the 1966 New York City Opera production of Guilio Cesare that made her a star. It is her voice and that photograph which established my personal benchmark for Handel’s most popular opera. It must sparkle musically to succeed, and La Scala’s new production of Guilio Cesare in Egitto dazzles. Danielle de Niese as Cleopatra and Bejun Mehta as Cesare sing with such mastery, including beautiful tone, beguiling phrasings and embellishments that are just as lovely. There is a playfulness to their performances that is infectious, whether they are expressing despair, love or triumph, and it spills over into the audience.

Robert Carsen surprised me. The posters depicted a modern soldier with a gun staring out at the desert, prompting concern that this Guilio Cesare would be one long and sandy slog across a barren stage. Instead, the production was visually exciting (except perhaps for those who favor togas over modern military uniforms), and his concept was Shakespearean in scale and spirit, full of wit, compassion, treachery and tragedy, with a dollop of Hollywood glamour.

Set in present-day Egypt, Cesare’s encampment is surrounded by barbed wire and guarded by soldiers toting automatic weapons. Cesare arrives in an army jeep, while the Egyptians step out of a shiny black limousine, hoping to jump-start peace negotiations with the gift of the severed head of Pompeo, Cesare’s rival. The Romans are repulsed by this atrocity, which sends Pompeo’s widow Cornelia and son Sesto into spasms of grief, and Cesare vows revenge. Cleopatra arrives in the guise of Lydia to seek justice, which actually means her brother Tolomeo’s throne.

Carsen’s portrayal of Cleopatra gives a nod to past depictions of this legendary beauty. Cesare is bewitched at first sight as she emerges from a rolled carpet; later, she takes a bath with servants pouring milk into a golden tub. Cesare learns of Lydia’s true identity while seated before a large screen, as the legendary Cleopatras of film – Claudette Colbert, Vivien Leigh and Elizabeth Taylor – yield to a beaming Danielle de Niese, whose beauty and allure are equal to that of those glamorous screen sirens.

The Egyptians live in imposing stone palaces decorated with friezes from the glory days before the Romans arrived. Tolomeo and his entourage gather in a room where the walls are encircled by luxurious leather chairs with shisha pipes to help ease their stress. In the finale, the celebration of the Roman triumph over Tolomeo and his forces is held in the desert with a large pipeline running across the stage and barrels of oil stacked high. People laughed, but there was an undercurrent of anxiety.

I first heard Bejun Mehta at a Marilyn Horne Foundation concert early in his career. I thought then that he had the most beautiful countertenor I had ever heard, and time has not altered that assessment. He was joined by two other superstar countertenors, Philippe Jaroussky as Sesto and Christophe Dumaux as Tolomeo. Dressed in military garb with short trousers, Jaroussky looked and acted like a geeky boy scout, but his singing was fiery and passionate. Dumaux, bearded and louche, sang with equal bravura and had the richest tone of the three.

In contrast to Danielle de Niese’s silvery soprano, Sara Mingardo’s contralto is sumptuous and dark; she is peerless stylistically and in rendering emotion though her voice. First sent to the palace gym to clean equipment, Cornelia is then ordered to serve in Tolomeo’s harem, where the women are dressed in bright robes and veils but handcuffed and with shiny black tape across their mouths. It wasn’t Carsen’s first socio/political jab, but it was his most pointed.

The production was monumental in scale but never overwhelmed the singers. Carsen made sure they were almost always front and center and singing directly to the audience. For the closing sections of the da capo arias, a large wall came down, and the singers were free to mesmerize with their beauty of tone, musicianship and all the emotion that they could muster.

With Guilio Cesare, La Scala has launched a Baroque cycle; Handel’s Agrippina and Ariodante are slated for future seasons. It has only staged Guilio Cesare once before, in 1957, with a cast that featured some of the greatest stars of the era – Virginia Zeani, Giulietta Simionato, Nicolo Rossi Lemeni and Franco Corelli – voices unlikely to be heard in Baroque opera these days. Although I admit to indulging in my share of guilty pleasures on recordings from that bygone era, that is all in the past.

The historically informed performances that we take for granted today are due in part to visionaries such as Raymond Leppard who died the day after this performance in Indianapolis at the age of 92, where he had long made his home. Leppard and others of his generation exposed us to music that had been lost to time and provided insights as to how it might have sounded when new. To experience Handel’s Guilio Cesare at La Scala with singers and instrumentalists so versed in period style is part of his legacy and a fitting celebration of his life and work.