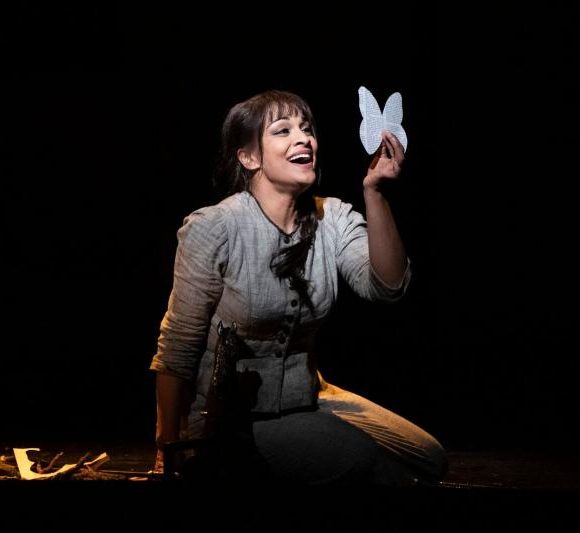 Gentle update of Massenet’s charmer can misfire, but the Cinderella story keeps its magic

Cendrillon is Jules Massenet’s operatic version of Cinderella, based on the Charles Perrault story of 1698. It is a fairly faithful to the story we know, although it includes a dark third act, the scene after the ball, where Cendrillon attempts suicide. But, of course, the spirits intervene, and all ends happily. This production, directed by Fiona Shaw, was first staged by Glyndebourne on Tour in October 2018, and now joins the main Festival programme, the revival directed by Fiona Dunn.

It is a grand affair for touring opera, though the origins are clear from the reflective surround used to increase the apparent scale of the set (by Jon Bausor). The background is made up of four revolving translucent prismic columns, variously depicting the mansion of Cendrillon and her step family, neon colonnades at the ball, and, when each is filled with a tree, the enchanted forest of that dark third act. It is most effective in the ball scene, where the faces of the four columns are suddenly illuminated as the figures of a digital clock, with Cendrillon and the Prince trapped in adjacent numbers as the readout approaches midnight.

Most of the designs and costumes (by Nicky Gillibrand) suggest the modern day, with only a few explicit updatings—the stepsisters take a selfy when they have dolled up, Cendrillon’s suicide attempt is by overdose. But generally, Shaw retains a timeless, fairytale quality. She adds a young girl as a mute observer—perhaps this is the child’s dream, perhaps she is young Cendrillon—an invitation for Glyndebourne’s (fairly senior) audience to see the story through a child’s eyes. More effective is Shaw’s use of butterflies to symbolise love and freedom: When Cendrillon is transformed by the Fairy Godmother, she steps into a suit bag as if it were a pupa, reappearing in her ball gown. 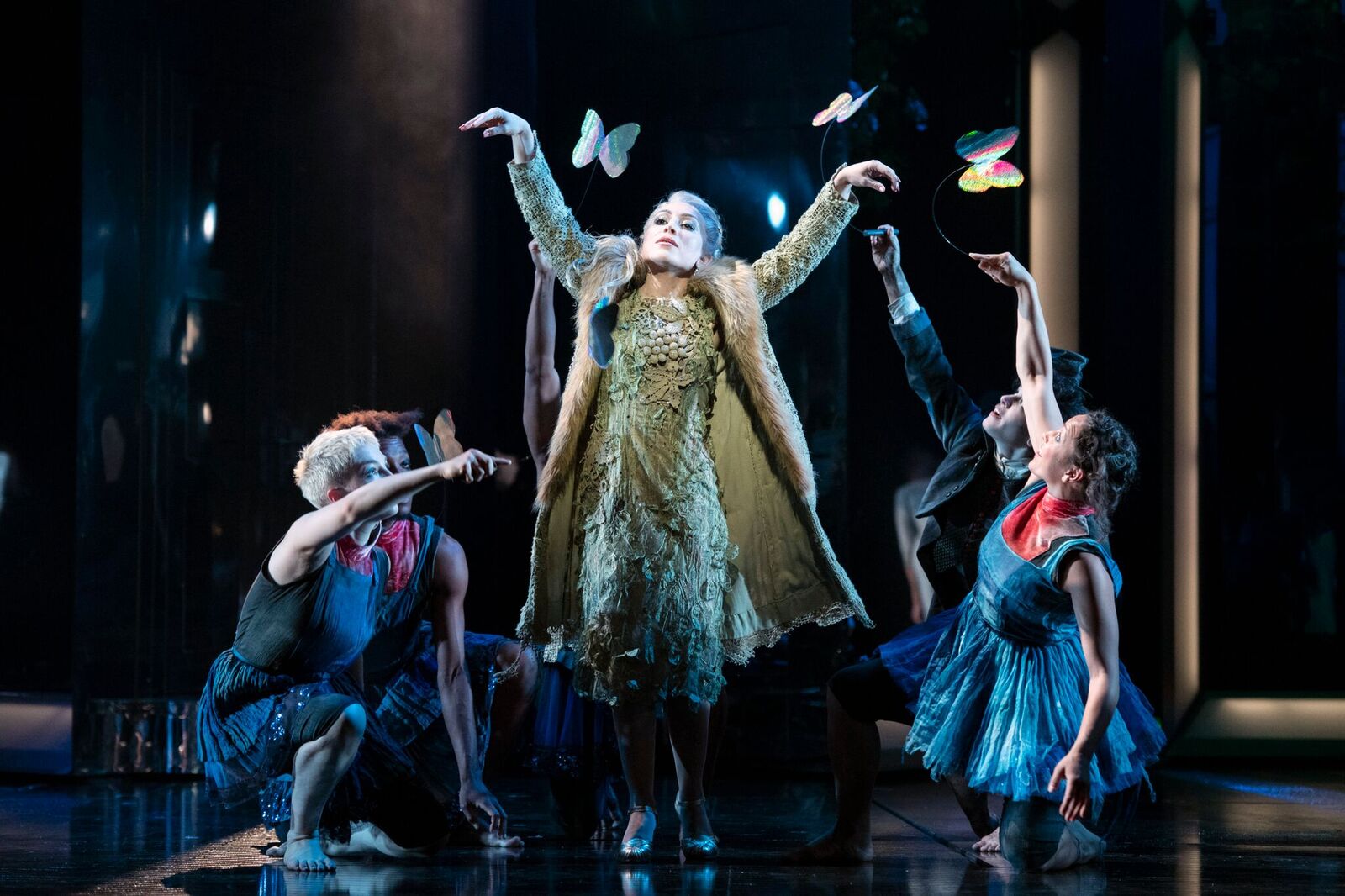 Danielle de Niese gives a clear and lyrical account of the title role. Her voice is a little too assertive and muscular for such a juvenile presence, but she makes up for it in sheer star power. De Niese can act, dance, seduce, she can even change into a ball gown while dancing in a suit bag—she’s got the whole act, and she dominates the stage from beginning to end. The stepmother (Agnes Zwierko) and stepsisters (Eduarda Melo, Julie Pasturaud, all pictured bottom, with Adam Marsden as the King) are presented as chavvy grotesques, all neon Lycra and cheap bling. That sits uneasily with their generally lyrical music, but makes for effective, if bawdy, comedy, and is also, thankfully, the production’s only allusion to pantomime. The Belgian baritone Lionel Lhote has the advantages of native French and a paternal disposition in the role of Pandolfo, Cendrillon’s father, though the production never seems to know quite what to do with him. Most of the smaller roles are taken by members of the Glyndebourne Chorus, and several shine, particularly the rich-toned Romanas Kudriašovas as the Master of Ceremonies and the energetic Anthony Osborne as the Dean.

Best of all is the Fairy Godmother, sung by Nina Minasyan (pictured above). Massenet brings plenty of magic to this role, written for a high coloratura soprano, much of it in wordless vocalise. Manasyan has the ideal lightness and agility of tone, and is aided at each appearance by atmospheric lighting effects and her group of six singing and dancing spirits. 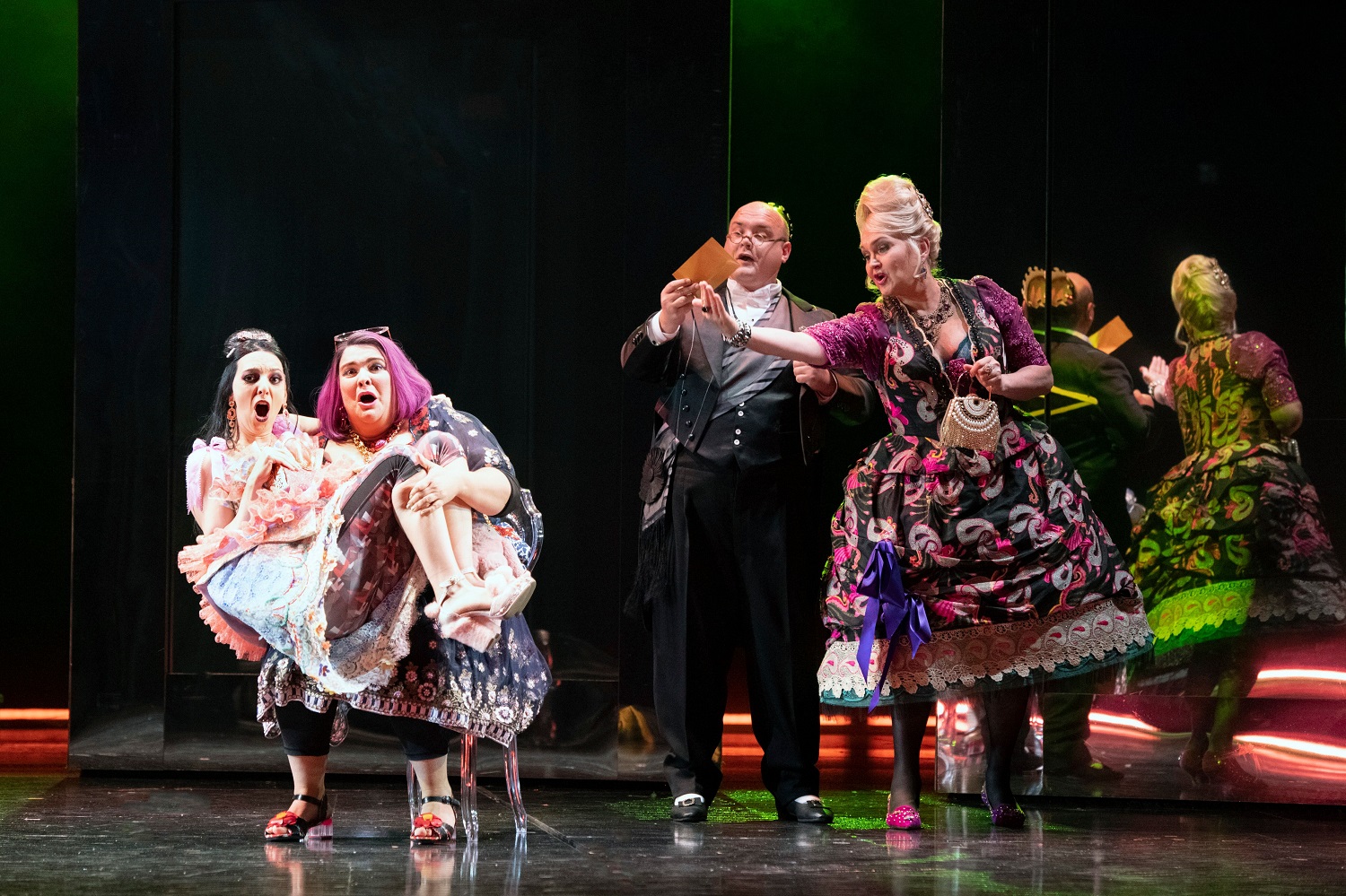 Shaw saves her most radical reimagining for Prince Charming. The role is for a female singer, sung with suitably uncompromising ardour by Kate Lindsey, and Shaw explains that she sought to represent the character as a child’s (Cendrillon’s) image of an ideal prince. So, Cendrillon is added to the scene where the prince is introduced, as if she is willing him into existence. This is the one scene in the production that really doesn’t work, the Prince being roused from bed now transformed into an operation to remove his heart and replace it with an alarm clock—unnecessary and gruesome. At the end, the Prince is revealed to be one of the female servants in Cendrillon’s house. The gender ambiguity is very causal—Cendrillon doesn’t care, so why should we? It sets up a role reversal for the final scene, with Cendrillon choosing the Prince from a line-up. This makes a nonsense of the narrative, but it doesn’t matter, by then the opera is over.

John Wilson conducts a light and efficient reading of Massenet’s colourful score. He doesn’t linger on the orchestral details, all beautifully rendered by the London Philharmonic, and restrains the dynamics, putting the music to the service of the stage action, and perfectly complementing Shaw’s evocative fairytale world.