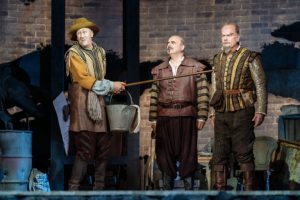 “the real star of the show, is Danielle De Niese …her voice soars and enchants with a lilting sweetness and strength”

Man of La Mancha is set in a Detention Centre and begins with the arrival of two new prisoners, Cervantes and his manservant. They have a trunk with them, and the inmates are keen to plunder it. The Governor, played by Nicholas Lyndhurst, wants to put Cervantes on trial and confiscate his belongings if he is found guilty, and Cervantes makes his defence in the form of a play; Don Quixote. The Don tilts at windmills and falls in courtly love with Aldonza, a serving girl and part time prostitute in a roadside inn, who he sees as a perfect woman and names his Lady Duncinea. Cervantes casts the other inmates in various roles, and the Governor plays the innkeeper, giving Lyndhurst the opportunity to switch from forbidding to gently incompetent, which he does with skill and evident enjoyment. Cervantes’ manservant and Don Quixote’s squire Sancho Panza are played by Peter Polycarpou, and he is one of the show’s delights. He is funny and touching in his devotion to the eccentric knight, and to his ‘real’ master.
The other delight, and the real star of the show, is Danielle De Niese who plays Aldonza/Dulcinea. She is fiery, strong and vulnerable, angry at Quixote’s refusal to see her for who she really is, coping with the rough muleteers in the inn, who eventually brutalise her, and very touching at the end when she accepts the name Dulcinea for the first time and starts the spine tinglingly beautiful cast version of The Impossible Dream. Her voice soars and enchants with a lilting sweetness and strength, and her acting is powerful and compelling.
It is Kelsey Grammer’s misfortune to be surrounded by a cast of hugely talented singers. His Cervantes/Quixote is engaging and hugely characterful; on the acting front he doesn’t put a foot wrong, but his voice doesn’t stand up well against virtuoso talent such as De Niese. His rendition of ‘Dulcinea’ felt insecure and in his solo ‘Impossible Dream’ he seemed to be bracing himself for the top notes. When the muleteers sing ‘Little Bird’ it is evident that there are some fabulous voices in the ensemble; this is a very strong cast. Emanuel Alba deserves a mention for his lovely comic turn as the barber, and Eugene McCoy’s Duke has a nice touch of the Lucius Malfoys when we first see him.
As you would expect of the Coliseum, the set, lighting and sound, by James Noone, Rick Fisher and Mick Potter respectively, are superb. Rebecca Howell is the choreographer, and she has created some exceptional work, such as the electrifying gypsy dance, for this piece. Fight Director Kate Waters produced a lovely comedy fracas at the inn, and Fotini Dimou’s costume design allows for some impressively quick changes and helps create a convincing world within Noone’s set.
The story of Don Quixote is a love song to the imagination and Man of La Mancha takes us into a double world. Do we prefer the reality or the fantasy? Each of us has to decide for ourselves, but Quixote’s fantasy world has a purity and beauty that entices and enchants.