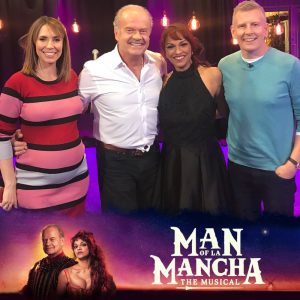 Man of La Mancha stars Kelsey Grammer, and Danielle De Niese recently appeared on BBC’s The One Show, where they talked about the West End musical. At the end of their appearance, they performed “The Impossible Dream.”

The full episode is available to watch to viewers in the UK only here.

“That the world will be better for this” @KelseyGrammer and @Danielledeniese join the One Show sofa to discuss the powerful message of #ManofLaMancha and perform a special version of #ImpossibleDream pic.twitter.com/2HDS48vX6H

Watch the full interview portion of the episode below!

Peter Polycarpou joins Kelsey Grammer, Danielle De Niese, Nicholas Lyndhurst and Cassidy Janson in the acclaimed musical which opens at the London Coliseum on 26 April 2019 for a limited six week season and will be performed with the ENO orchestra.

Man of La Mancha is directed by Lonny Price,

In a 16th century dungeon Cervantes and his man servant await trial from the Spanish Inquisition. In his possession he has a trunk carrying an unfinished novel, Don Quixote. As prisoners attempt to steal his possessions, Cervantes embarks on acting out his novel as his defence, transforming himself into Alonso Quijano.

Quijano, deluded, believes he is a knight errant, renames himself Don Quixote de la Mancha, and sets off on a fantastical quest with his man servant Sancho Panza.

Chivalry abounds in this classic tale of knighthood, love, loyalty and adventure.

The music in Man of La Mancha is by Mitch Leigh, lyrics by Joe Darion and book by Dale Wasserman.