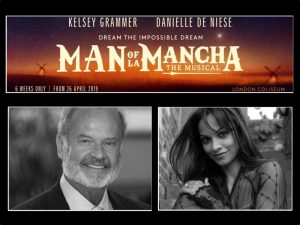 In a 16th century dungeon Cervantes and his man servant await trial from the Spanish Inquisition. In his possession he has a trunk, carrying an unfinished novel Don Quixote. As prisoners attempt to steal his possessions, Cervantes embarks on acting out his novel as his defence, transforming himself into Alonso Quijano.

Quijano, deluded, believes he is a knight errant, renames himself Don Quixote de la Mancha, and sets off on a fantastical quest with his man servant Sancho Panza.

Chivalry abounds in this classic tale of knighthood, love, loyalty and adventure.

Man of La Mancha will be directed by Lonny Price, who also directed Linnit and Grade’s acclaimed London productions of Carousel, Sweeney Todd: The Demon Barber of Fleet Street and Sunset Boulevard, as well as the hugely-successful subsequent Broadway transfer of Sunset Boulevard.