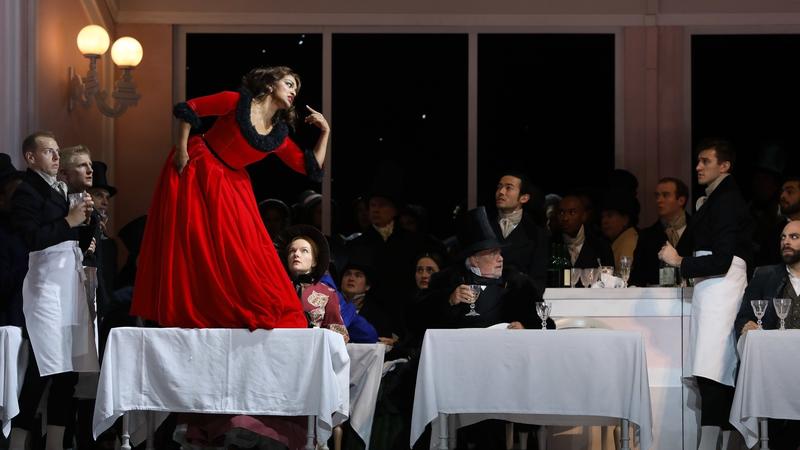 Few operas are better known or more frequently performed than “La Bohème,” Giacomo Puccini’s simple and beautiful tale of love in Paris — the city synonymous with it.

Among the big questions for today’s stage directors is whether they stick with tradition or try to update this 1896 work in some radical or not-so-radical way. For the production now at the Lyric Opera House, director Richard Jones largely opted for the former, keeping the setting in the 19th century with top hats and long dresses but still refreshing it with a decided spirit and spunk and a few contemporary undertones.

Jones clearly wanted to try and scrape away some of the theatrical clichés that have become encrusted onto this work. He pushed the boundaries in Act Two, taking the dinner scene almost (or completely, depending on your point of view) over the top, turning Musetta’s hijinks into even more of a scandale than usual. She flings her panties onto Marcello’s table and kisses one of the female diners — seemingly more 21st- than 19th-century gestures.

At the same time, he played up the spartan lifestyle of the four artists. Mimì dies lying on a truly raggedy rug and pillow. And the Bohemians’ white, barn-like attic apartment with its prominent roof trusses has none of the romanticism of the Parisian garrets often depicted in productions of this opera.

Indeed, stage and costume designer Stewart Laing (making his Lyric debut) put the emphasis on spareness, even starkness, playing up both the poverty and wintry cold. The only exception was his gloriously opulent depiction of Paris in Act Two, with three pass-through set pieces inspired by the city’s iconic glass-topped shopping arcades. Abundant supplementary color was provided by Laing’s diverse array of high-style costumes.

The stagecraft was unusual and even a little startling at times, and contributed to the production’s sometimes contemporary feel. The piece was performed with no front or side curtains and with the overhead lights visible nearly the entire time. At times, Jones made use of the full, unmasked vastness of the Lyric stage, as at the beginning of Act Two when a massive adult and children’s chorus bustles spectacularly onto the stage.

Because there was no front curtain, the opera was paused after Act One and the opening set was turned and moved to rear of the stage with no effort to camouflage the stagehands (an effort that was repeated in reverse before Act Four). Clearly, Jones and Laing were not interested in some of the theatrical illusions and protocols traditionally employed.

Nitpickers could point to a couple of rough-edged high notes, but it was hard overall to find fault with Fabiano’s passionate, convincing performance in his Lyric debut. The winner of both the Richard Tucker and Beverly Sills Artist awards, he possesses a pleasing tenor voice and an obvious affinity for Puccini’s brand of vocal writing.

Soprano Danielle de Niese, who made her debut as Musetta earlier this year in London where this co-production began, was as vocally and theatrically compelling as ever. She was a kind of madcap whirlwind, totally buying into Jones’ amped-up approach to Act Two, yet also bringing heart to this essential supporting role.

But the clear star, as should be the case, was Italian soprano Maria Agresta, who was first heard at Lyric last season as Liù in “Turandot.” She has made Mimì a signature role, and it’s not hard to understand why with her clear-voiced subtlety and naturalness.

Both in her body language and her singing, she palpably conveyed the humility and vulnerability of this character, especially as Mimì huddles in the cold in Act Three and ultimately feels forced to abandon Rodolfo.

Venezuelan conductor Domingo Hindoyan made an impressive Lyric debut in the pit, bringing out the best from the company’s orchestra and vibrantly pacing the action. He was at his best during the Act One duet between the two lovers, as he organically responded to and supported these two singers.

Newcomers to “La Bohème” will get a full sense of this opera’s power and poignancy with this production, and returnees will find elements that are fresh and appealing. Put simply, Lyric has a success on its hands.

My life through a lens: Opera singer Danielle de Niese

At Home With – Soprano Danielle de Niese in Glyndebourne