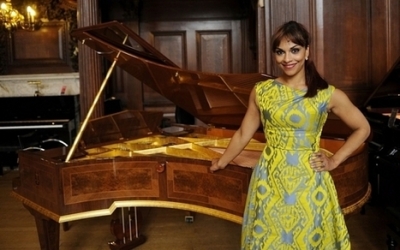 An evening of intense feeling and colourful theatricality. Alongside Danielle de Niese, two veteran musicians were included, Menahem Pressler and James Galway. The latter’s flute provided a beguiling evocation of the melancholy nightingale in the first of Roussel’s Two Ronsard Poems, as de Niese’s sultry vocal line danced and entwined in sensual sadness. Schubert’s Quartettsatz was then given an energetic and gutsy outing by the Navarra Quartet, the lyrical cello line played with intensity by Brian O’Kane. This led beautifully to ‘Shepherd on the Rock’ in which Mark Simpson’s clarinet never gave up in excitement and pathos, balanced by Pressler’s delicate rhythmic backing, and de Niese going for the jugular with passionate joie de vivre.

The second half was darker. Chausson’s Chanson perpetuelle tells a tragic tale of abandoned love, with all its despair; the piano quintet accompaniment offering delicate and lyrical sobbing. Pressler and the Navarra members played with urgency and sympathy as de Niese again used all her expressive power to convey the drama. Schubert’s song ‘Death and the Maiden’ followed – de Niese capturing its duality perfectly – and it segued into his eponymous String Quartet, singer and pianist remaining to listen. It was a spellbinding performance. There was an encore from de Niese and Pressler, Tchaikovsky’s ‘At the Ball’ (Tolstoy), redolent with the glories, anticipation and uncertainties of life and love, sung with warmth and generosity.