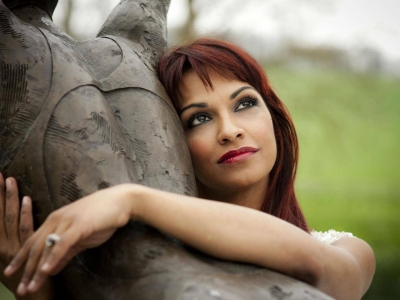 When Soprano Danielle de Niese was asked to present a televised singing competition, The Glyndebourne Opera Cup for young performers, the decision was a no-brainer. “Ofcourse I was going to say yes. I am literally married to this place: in my heart, artistically, and also because of Gus.”

Glyndebourne, the place, is the opera house in the Sussex countryside where De Niese got her big break as a singer in 2005, giving a star-making performance as Cleopatra in David McVicar’s wildly successful production of Handel’s Giulio Cesare. And Gus is Gus Christie, De Niese’s husband and executive chairman of Glyndebourne, whose grandfather John Christie first built a small opera house here in 1934, for his own soprano wife.

Meeting De Niese at Glyndebourne, which is now also her home, there are pretty obvious other reasons why you might pick her to front your show: the 38-year-old is a whirl of energy, enthusiasm and old-school glamour, simultaneously a breath of fresh air ready to blast away any notions of opera being stuffy, and a character who delightfully lives up to the expectations of the opera diva. She arrives swathed in a fur coat and striding on killer heels; she’s voluptuous and expressive, prone to throwing her arms wide and letting her voice rise when she’s passionate about a subject. Which is a lot of the time. 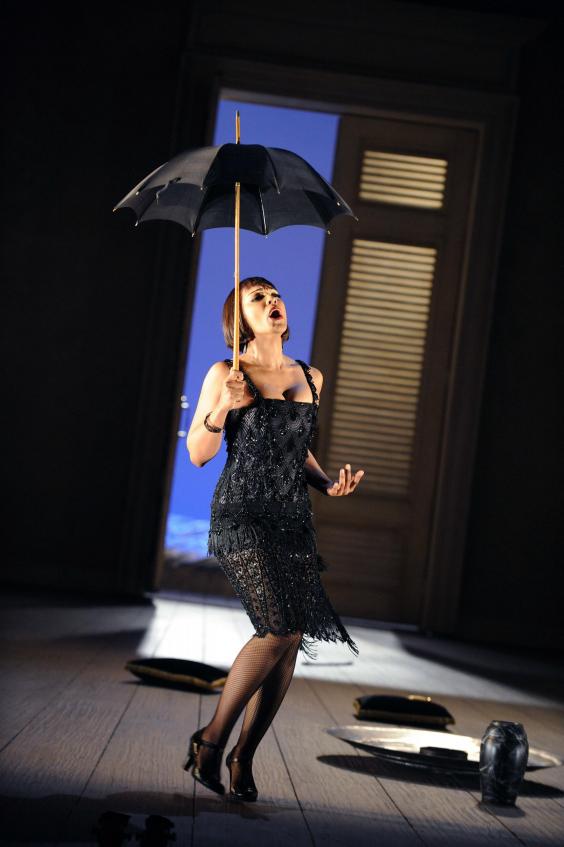 It is no wonder, frankly, that the camera loves her as much as audiences do – De Niese has been in front of it since she was a child. Born and raised in Australia, to Sri Lankan parents, the family moved to LA to further her performing career when she was 10. After appearing on a show called LA Kids, she was asked back to host it, aged just 16. It went on to win an Emmy.

All of which means she feels right at home doing live TV. “You get used to it; what I feel when a camera is there is not the stress and anxiety some people feel.”

Competitions are nerve-wracking things, and adding cameras will surely up the ante for the international singers competing for the Glyndebourne Cup. All aged between 21 and 28, Sky Arts has been following their progress ahead of the live final on Saturday. “Being in the public eye, the pressure of that is trial by fire, and some people flourish and some people don’t,” acknowledges De Niese.

Not that she’s ever struggled with the extracurricular business of being a star: as well as presenting TV shows, De Niese has appeared in the movie Hannibal, is a keen tweeter, and has cultivated relationships with many a fashion designer. She acknowledges that, today, having a brand is more important than ever – but that it’s never the most important thing. “Opera is one of the last metiers where, ultimately, what you bring as a singer will trump just about everything. That’s a good thing.” 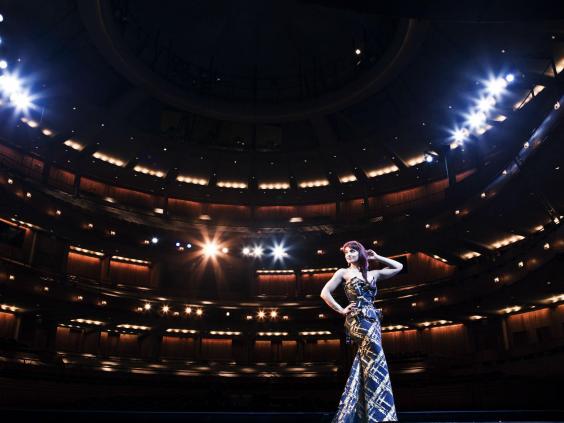 ‘Opera is one of the last metiers where, ultimately, what you bring as a singer will trump just about everything. That’s a good thing.’

Her own career continued its improbably vertiginous ascent when, at 18, she became the youngest ever singer to enter the Lindemann Young Artist Development Programme at the Metropolitan Opera in New York. She’s since released four solo albums, gone back to the Met to perform Susanna in The Marriage of Figaro, and recently reopened the Sydney Opera House with The Merry Widow. This summer, as well doing Don Pasquale at the Vienna State Opera and giving her first Musetta in Richard Jones’s production of La boheme at London’s Royal Opera House, she is presenting a documentary of forgotten female composers for the BBC.

She likes to keep busy. And her lifelong, laser-focused ambition helps: “I’ve been dreaming about singing since I was eight,” she says.

As someone who’s been in this high-pressured industry from such a young age, has she come across the sorts of abuses of power now being revealed by the #MeToo movement?

“I’d be lying if I said our industry was immune to it,” she says. “In as far of the millions of stories I have heard, a lot of them are quite consensual, [people] willing to have a little fling with a maestro because it was beneficial to both… I’ve steered well clear of that.” She thinks there was an unspoken protection of her when she was on the Met’s young artist programme: “They did a very good job at keeping certain kinds of people who might have had that lothario reputation away from me… maybe they were extra careful because I was just so young – I was 19, where everyone else was closer to 30.” 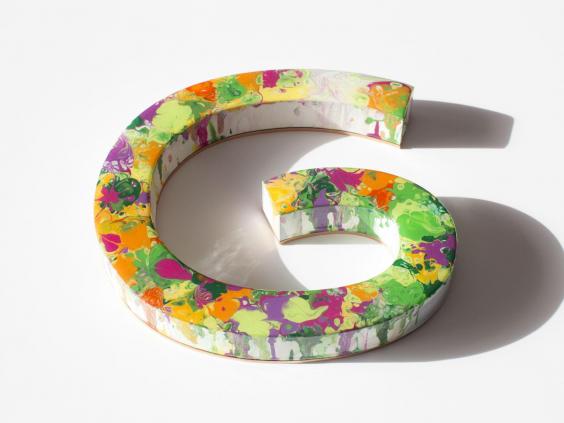 She recalls one later working relationship with an older man, where she could feel a sexual interest. “I wasn’t having it; I made sure every vibe I gave to that person was ‘you’re like a grandpa to me!’” But she acknowledges that she was lucky enough to feel she had options – and that abuses of power occur when young artists feel like accepting unwanted advances is their only route into a hyper-competitive industry.

Of course, De Niese herself married the boss – but her relationship with Christie appears to be a fairytale romance. They met when she was performing at Glyndebourne, although it was two years before they got together. Now, she’s the lady of the manor as well as the leading lady, living with Christie and their two-year-old son in the gorgeous 16th-century pile next to the opera house.

Still, it was quite an adjustment: during Glyndebourne’s summer season, the house is filled with people, with many of the creatives living in. But De Niese recognises how valuable the sense of community at Glyndebourne can be for those working there. “What they give artists – it’s like the womb! It’s a nurturing community in this amazing environment, it’s really special.”

Did she know, when performing Gulio Cesare, that it was going to be a hit? Absolutely. “Everyone was buzzing about the show,” she recalls, adding that on the first night she burst into tears backstage mid-costume change because the volume of applause “was so overwhelming”.

De Niese is clearly unafraid of emotional display – indeed, she believes this is what elevates a performance. “The performances that grab me are when I see a person who truly feels something. For me, performing is about feeling an emotion, allowing that emotion to create thought, and the thought comes out as text propelled on a bed of sound. It’s not: ‘see what a pretty sound I can make’.” 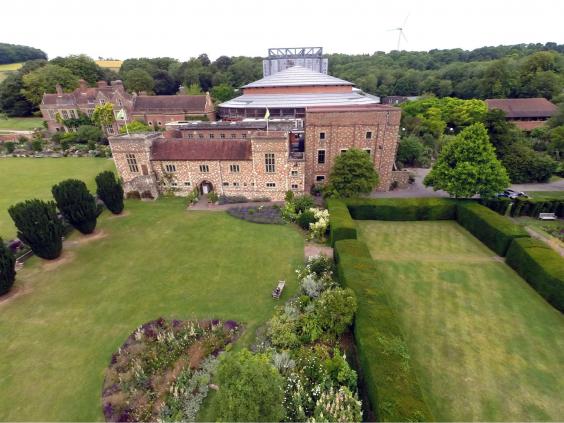 The Sky documentary reveals that the opera cup’s judges are looking for a similar thing: evidence of an individual voice, rather than pure technical accomplishment. It’s a fascinating insight into the opera world.

And for De Niese, pulling back the curtain on their industry is crucial. “I hope casual viewers will tune in – it’s good to put a modern face on opera, because it’s got a modern face!” she enthuses. “People still have an arcane view about the stereotypes of opera, and it’s mainly just about not knowing. Everything I do is about just opening the door and saying this is what opera actually is.”

This is how we consume culture today, she suggests: we want to know the people behind the work, their stories and intentions. “We live in a day and age when we want to know why Beyoncé created Lemonade, we don’t just want an album.”

The Sky programme follows a relatable format: the singing competition, with all its emotional arcs and nail-biting live performances. It’s not “watered down”, however, De Niese insists – they’ve got world-class judges on board, including Glyndebourne’s Sebastian Schwarz, Barrie Kosky of Komische Oper Berlin and opera singer Dame Janet Baker.

De Niese knows the scorn that can be poured on shows that attempt to bring opera to a wider audience; when she appeared on Pop Star to Opera Star, “I got so much flack: ‘Why are you doing this?’ Well, why not?” This open spirit is key to her approach to being a very modern opera star. “I am a pop culture girl. I just want opera to have its place in that conversation.”

Danielle de Niese will be presenting the inaugural Glyndebourne Opera Cup, which airs on the 22, 23 and 24 March on Sky Arts