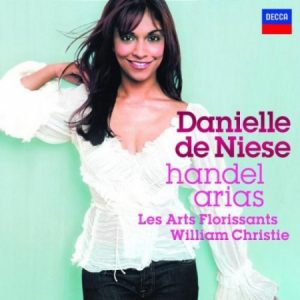 After an “astronomic rise to prominence in the last twentieth century”, Danielle de Niese makes her stunning solo recording debut on Decca Records performing an impressive line-up of Handel Arias with William Christie.

“This meteoric new soprano puts on quite a show, displaying her ability to suggest different moods and personalities through both virtuoso agility and tonal fullness and showing skill in embellishing da capo sections.” – American Record Guide

“..A voice seductive enough to woo gods as well as mortals. This is Handel in all his unabashed glory, and there is nothing restrained about Ms. de Niese’s warmly voluptuous and passionate singing.” – The New York Times

“The voice is substantial, her agility impressive, her commitment to and apparent enjoyment of the music a pleasure to hear. Her vibrato is warm and attractive. Her presence as a “performer” is vivid and intelligent.” – Classics Today